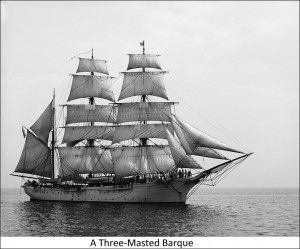 On 8 February, 1844, the barque Saladin sailed from Valparasio, Chile, bound for England under Captain Alexander (Sandy) MacKenzie. Its cargo was primarily Guano, (a valuable fertilizer product); however, also in the hold were seven thousand silver dollars, a pile of 13 silver bars and 90 tons of copper. The ship never reached its destination, and instead was found stranded near Country Harbour in Guysborough County, Nova Scotia. When boarded by a Captain William Cunningham of the schooner Billow, six inebriated men were found to be “acting suspiciously”. 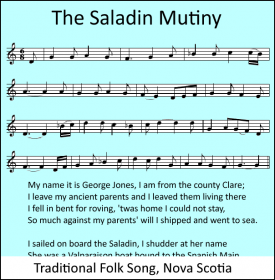 Charged with piracy, the mutineers were ordered to stand trial for murder. Among the conspirators were George Jones and John Hazleton, both Irishmen from county Clare. Four men were sentenced to death by hanging and the sentence was carried out on July 30, 1844. It was the last public execution (of multiple prisoners) in Halifax and hundreds turned out, children in tow, to witness the macabre spectacle. A gallows was erected on the South Common (now the site of Victoria General Hospital) and the condemned men arrived in a prison wagon surrounded by “a red coated company” of the 52nd Regiment armed with rifles and bayonets. Hazleton and Jones were buried in Holy Cross Cemetery.