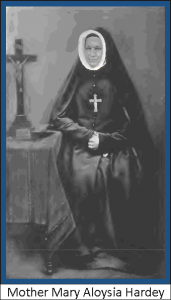 In the spring of 1849, Mother Aloysia Hardey brought five Sisters of the Society of the Sacred Heart of Jesus to Halifax in response to the great teaching need which had been identified by Archbishop William Walsh. They settled in a house at Brookside, the present site of the Lord Nelson Hotel. The house was a frame building, surrounded by three acres of land, thickly planted with fruit trees, and the dwelling was said to be well-provisioned for their arrival by the Archbishop. Their academy opened the following week with 13 pupils.

The order had been established in 1800 by Madeleine-Sophie Barat who was “at heart a contemplative and a lover of the poor”. Aiming at the rechristianization of families by the education of girls, she opened both boarding schools and free schools, the latter being financed by the proceeds of the former. This same model was followed by the Sisters in Halifax who established both a private and a free school, serving thereby all social classes.

Two years later, the Convent moved to permanent quarters on the then Halifax Commons, at its present location on Spring Garden Road. 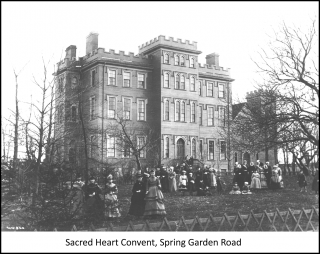 It was reported to be a magnificent building with a “vast entrance hall, stately winding stairs and solemn parlours”, and next to it was built a barn and cottage. Shortly after their relocation, a free elementary school was opened in the barn, and it developed into a flourishing public school. In 1901, it was moved to College Street where it achieved outstanding success. The private academy, of course, continues to flourish still today. The Sisters are rightly seen to have given “glory to the Heart of Christ through Catholic education”.