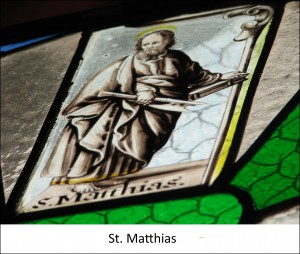 The Chapel furnishings are spare, but it is dignified by its remarkable statuary and stained glass. The altar reliefs have already received national recognition, and Peter Morris has noted that “this is surely a nationally significant ancient collection of stained glass”.

Bishop Walsh has by tradition been credited with the procurement of these panels. Walsh’s collecting activities on his European travels in support of furnishing the churches under his administration are well-documented, and his cultured taste extended to the antique and precious, including mediaeval statuary and manuscripts.

Shown here at the top in stained glass is the figure of St. Matthias who replaced Judas as the twelfth disciple. According to the Golden Legend, he was martyred by an axe which is portrayed in the roundel. He was not infrequently portrayed holding a book, as here also. Shown below is St. Catherine with the associated instruments of her martyrdom, the broken spiked wheel, sword and palm of martyrdom.

Mention should also be made of the grave markers which show evidence of a distinct Catholic cemetery iconographical tradition. A number of the stonecarvers have now been identified and further research in this area should prove of great benefit.