The Gourley Shanty Riot of May 26, 1856 is one of the most notorious incidents in Nova Scotia’s history. It became a watershed moment for the Irish Catholic community in Halifax and Catholics in the rest of the colony. 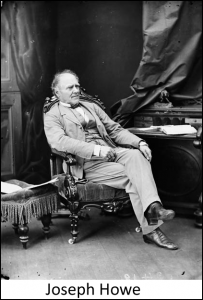 The day before the riot, on the Feast of Corpus Christi, “a group of Protestant railway workers ridiculed the ceremonial processions and faith of the Catholiclabourers”. The next day, outraged Catholics attacked the railway camp of a man named Gourley, who was said to have been among those ridiculing the Catholic ritual procession. By the evening, one hundred militia had been sent to the scene to quell the ensuring riot.

What converted this into an incident with larger political and cultural significance was the reaction of Joseph Howe. As the Chairman of the Railway board, it was his responsibility to file charges against those responsible, and in doing so, he defended the right of Protestants “to laugh at all religious absurdities, be they Catholic, Jewish or Moslem”. The remark was explosive.

That Howe’s remark had salience was due to a background of increasing strain related to the rapid immigration of Irish Catholics during the first half of the nineteenth century. Between 1815 and 1838, thousands of Irish arrived in Halifax. Where only 25% of Halifax’s population was Catholic in 1827, the proportion had risen to 42% in 1851, almost all of whom were Irish.

As sentiments heated up following the arrest and unsuccessful trial of the Gourley Shanty rioters, Howe sought retribution against William Condon, chief among his critics. Condon was head of the Charitable Irish, and vulnerable as a provincial employee. In early 1857, Condon was fired. Two weeks later, ten Liberals crossed the floor in protest and the government fell. Mr. Condon – Joe Howe’s nemesis – eventually gained a position as a lighthouse keeper, and lived out his working days there. He is buried in Holy Cross.