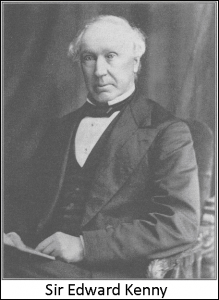 Mr. Kenny was a first-generation immigrant, born in County Kerry in Ireland in 1800; he married Ann Forrestall in Halifax, bore twelve children, and died in 1891, to be buried at Holy Cross Cemetery.

His first job was for a merchant in Cork who was doing business in Halifax. Relocating to Halifax in 1824 to manage trade at that end, it was only a few years before Edward and his brother set up a merchant trading firm of their own. Specializing in wholesale dry goods, the Kenny business prospered. In 1829, this experience with trade and local investment led the brothers to organize a passenger service by soliciting those with relatives in Cork, Limerick and Kerry to arrange for their transport.

Kenny played a notable role in the development of utility services in Halifax, but it was as a founder of the Merchants bank that Kenny made his greatest business contribution. 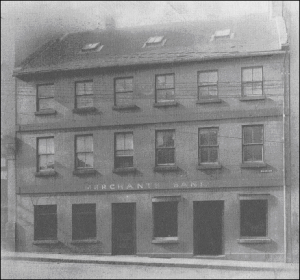 In 1864, the Civil War in the United States was at its height, and the North offered an eager market for all kinds of trade. Edward Kenny, William Cunard, John Tobin and a handful of other businessmen formed the Merchant Bank as a partnership venture. Reorganized under a federal charter a few years later, branches were opened in Pictou in 1870, at Antigonish, Bridgewater, Lunenburg, Truro and Weymouth in 1871, and at Sydney in 1872. This enterprise became the Royal Bank of Canada.