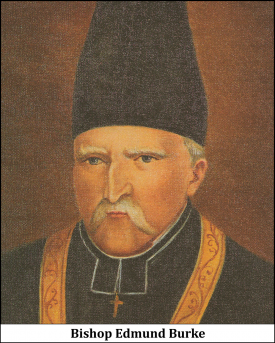 Halifax, like other parts of Nova Scotia, suffered a persistent shortage of priests in the early years. While Bishop Edmund Burke began instruction with young men in the Glebe House in 1802, his dream of starting an academy and seminary was not realized during his life. After many petitions, though, Archbishop Murray of Dublin sent two priests to open a college in Halifax. Located on Grafton Street near Spring Garden Road in three modest buildings, Saint Mary’s College started classes in January, 1840.

Later, under Irish-born Bishop, Thomas Connolly, Saint Mary’s was briefly relocated to the Nisbit estate at North and Agricola, to be led by the LaSalle Christian Brothers. A newspaper of the day reported on a debate held at the new location, complete with band music, on the topic ‘Were the ancients or moderns best?’. Moderns won. It ended with ‘God Save the Queen’. 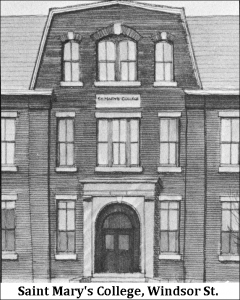 With the departure of the Christian Brothers in 1876, though, and the death of Connolly that same year, the experiment collapsed.

Short of funds, the College closed in 1883. It remained so until Archbishop Cornelius O’Brien, the first Canadian-born prelate in Halifax, organized a successful fund-raising drive to finance the construction of a collegiate on Windsor Street, on the same site as Holy Cross Seminary, the Monastery of the Good Shepherd, and St. Joseph’s Orphanage. Saint Mary’s reopened in 1903 with two classes totalling 24 students. O’Brien’s successor, Archbishop Edward McCarthy, was able to secure funds from the estate of Patrick Power, a wealthy Catholic merchant, and the future of Saint Mary’s College was made secure.