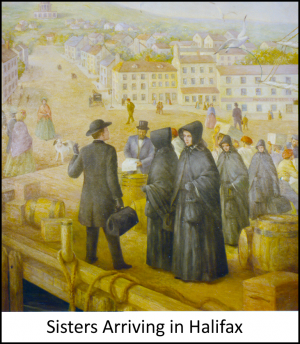 Convinced that education was vital to the well-being of even the poorest Catholic families, Bishop Walsh approached the Sisters of Charity, New York for help in staffing St. Mary’s, the only parochial school in Halifax. The New York Charities answered the call and on May 11, 1849 the first four Sisters landed in Halifax.

By the end of their first year in the City, the tiny mission had doubled the enrolment of students at St. Mary’s from 200 to 400 and their convent was also serving as an orphanage for 20 children. Perhaps best known for their work in the field of education, the Sisters went on to establish Mount Saint Vincent Academy in 1873 for the education of young women.

While the healthcare ministry of the Congregation traces its origins back to the Sisters’ care of quarantined Cholera victims at McNab’s Island, their first healthcare establishment did not begin until 1886 with the opening of a home for elderly women. 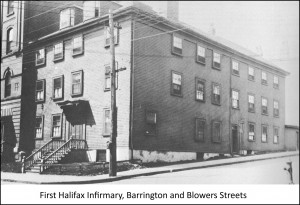 When the home was called upon to act as a makeshift operating room for an emergency surgery, the attending doctor was so impressed with both the facility and the nursing care provided by the Sisters, that he joined with several other local doctors in petitioning the Congregation to convert the home into a private hospital. It was from this humble beginning that the Halifax Infirmary developed.

By 1900, 34 Sisters had been buried at Holy Cross Cemetery. The Congregation’s efforts in education and healthcare helped provide the foundation for many of the social services that we now take for granted.