To ensure a secure and stable supply of meat in order to fulfil his contracts with the navy, Michael Tobin Sr. had to rely on imports form the American colonies, as well as Newfoundland and other locations in times of scarcity. Failing to provide product could mean both the dissolution of the current contract and the loss of future contracts. Given this, it was necessary for the elder Tobin to build a network of shipping contacts to guarantee the timely arrival of his supplies. Originally a small venture, the Tobin involvement in shipping would expand during his sons’ lifetimes to become a large and sophisticated network.

After the financial success brought on in part by the War of 1812, James and Michael Tobin had invested in ships’ shares, as well as contracting vessels for their export and import business. One of the earliest identifiable vessels was the schooner Hope (131 tons) which they offered for sale or charter in 1815. This was a risk venture since shipwreck could result in considerable financial loss quite apart from the death of seamen and ship-masters. Fate seems to have been kind to them for there is no record located to date which would reveal such a disaster, though not all of their ships escaped storm damage. Other vessels in which the Tobins had majority shares may have included the brig Perseverance (1817), brig Elizabeth (1819), brig Fame (1820), brig Devonshire (1831), brig Sarah (1832), and schooner Industry (1833). Two vessels are known from the records as having been held by the Tobins. The first ship was the Baby which they purchased in 1824; Baby was constructed at Isle Madame, Cape Breton Island, and appears from later shipping lists to have been intended for New Brunswick and Newfoundland trading. A year later they joined with the Halifax firm of Belcher, Binney & Co to acquire the brig Bermuda (built at Bermuda, 171 Tons) for the West Indies business. 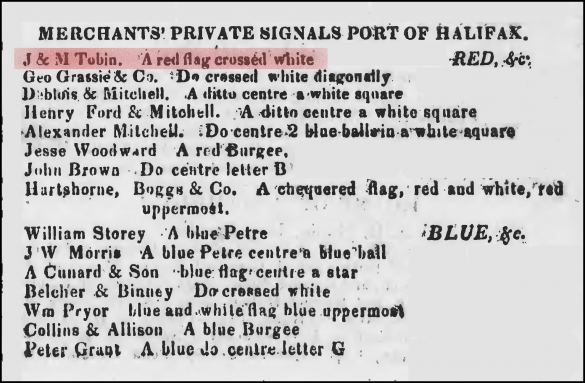 By 1823, when merchants’ flags were being flown from the signal mast on Citadel Hill to announce the arrival of their vessels, the J. & M. Tobin firm had their own identifier: a red flag crossed white. A newspaper scan of the late 1820s and early 1830s for J. & M. Tobin ship departures and arrivals indicate shifts in trade prosperity. In 1828, there are 18 vessels noted in the papers linked to the firm; in 1830, the number was at 19 ships; and in 1831, the number had nearly doubled to 35 entries under shipping news.

With regard to trade, J. & M. Tobin had developed an extensive trading network on both sides of the Atlantic. Irish ports included Cork and the Tobin ancestral district of Waterford. England provided the cities of London, Bristol, Poole and Liverpool for the importation of British goods. In British North America J. & M. Tobin traded heavily with New Brunswick (Miramichi, Restigouche and St. John) and Newfoundland (St. John’s, Harbour Grace, Burin and Carbonier), as well as with Pictou in Nova Scotia and Quebec city along the St. Lawrence River. There are records of trading with at least five American states – New York, Massachusetts, Maryland, Virginia and Pennsylvania. There is at least one trace of a venture to Gibraltar in southern Europe and one to the Isle of May in Scotland. By far the major trading ties, however, were with the British West Indies and other Caribbean contacts: St. Vincent, Trinidad, St. Kitt’s, St. Lucia, Bermuda, Jamaica, Demerara, Grenada, Barbados, Dominica, Barbuda, Antigua, St. Thomas, and the Bahamas; they also traded further south with Brazil (usually called the Brazils) at Pernambuco and Bahia. Sugar, molasses and rum were the main imports from the West Indies, while dry and pickled fish were the principle exports to the islands. 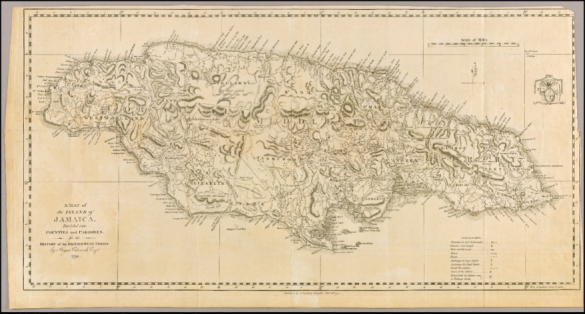 A Map of the Island of Jamaica, 1794 (Edwards), Original in the John Carter Brown Library at Brown University

The ports which James and Michael Tobin traded with in the West Indies were the destinations of other Halifax merchants in their circle as well, although there are differences which can be observed. This may be ascribed to personal ties or prior contacts, but James Tobin, as well as other Catholic merchants, also appears to have been taking advantage of Irish Catholic merchants residing in various West Indian ports. The Irish Diaspora had a sizeable presence in the West Indies dating in some instances back into the seventeenth century. Jamaica’s Irish population was partly of this background and was added to by subsequent migration in the eighteenth century. Many Irish had come over as indentured servants and had worked off their passage over several years. Others came as transported prisoners or virtual slaves. By the early 1800s, Irish settlers or their descendants could be found at all levels of society in many of the islands. It was this group of displaced Irishmen who made up the majority of the Tobin’s West Indian trade contacts, contributing to the Tobin’s overwhelming success as importers and exporters.