Though he was a founding member of the Halifax Banking Company, James Tobin did not confine himself to that investment alone. One other long discussed proposal was the building of a waterway link between Halifax and the Bay of Fundy by way of a series of canal locks on the Shubenacadie river system. In February 1826, a public meeting endorsed the proposal and formed a committee to push the matter ahead. Several of the gentlemen were partners in the Bank as well as other merchants: Joseph Allison, Samuel Cunard, Thomas Boggs, Lewis E. Piers, Charles Rufus Fairbanks, William Bruce Almon and John Alexander Barry. Funds were subscribed and shares allotted with Samuel Cunard investing £1000 himself. The Legislative act for incorporation was passed that same year and the building commenced on July 24th, amid Masonic ceremonies. To the above names, the Canal Company membership added James Tobin, Stephen W. Deblois, John Clarke, William Pryor and John Starr.

Map and Elevation of the Shubenacadie Navigation from Halifax Harbour to the Basin of Mines, 1883 (Keating/Hall)

A few years earlier James’s brother, Michael Tobin, had become a founding partner in a fire insurance company in Halifax as another investment of the surplus of the J. & M. Tobin firm. These initiatives for diversification and high profile investment were pushed farther in 1831 when both James and Michael Tobin became investors in the Quebec and Halifax Steam Navigation Company. It was a pioneer venture for British North America as well as an important step for Samuel Cunard’s foundation of trans-Atlantic steamship lines. The proposed flag-ship vessel was to carry passengers and the mail between the two ports. The general public was captivated by the idea of a novel transportation system. Early in 1830 notice was given of the opportunity for investors to sign up. More than 200 public investors put in capital to launch the line, including several leading merchants. Besides the Tobins, there were the Irish Catholic businessmen, Richard Harney Sr. and Charles Keefler. Other familiar names included Richard Tremain, Thomas Grassie, Andrew Belcher, Temple Lewis Piers, J. A. Barry, Charles Fairbanks, and Joseph Allison, as well as newcomer Alexander Keith.

The vessel was built at George Black’s shipyard in Quebec City and given the title “Royal William”. Papers of the day give descriptions of great excitement at the ports of call for the initial run (Quebec, Halifax and Pictou). It proved to be both popular and a sound investment. Unfortunately, the Company did not outlast three years due to exceptional circumstances involving the rescue and transport of immigrants who, it turned out, carried a contagious illness. This led to quarantine of the Royal William and loss of service. Eventually the investors sold at a loss and other shareholders revitalized its career, which ultimately included trans-Atlantic sailings. 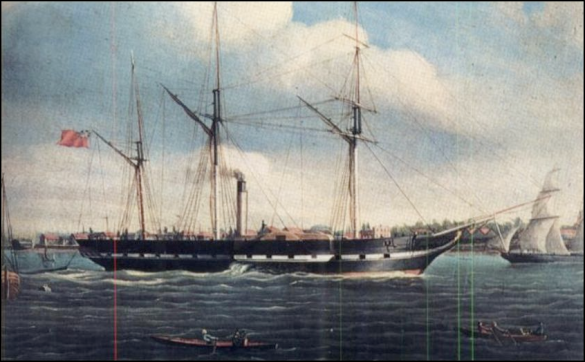 In 1828, James Tobin backed another transportation scheme, this one by land. He joined in a plan to provide stage coach service between Halifax and Kentville with fellow Haligonian, George N. Russell, and valley partners, James D. Harris and Caleb H. Rand. Legislation authorized the expenditure of £300 annually for five years to subsidize the stage coach line.

James and Michael did not slacken their shipping investments, though, since some time shortly before 1832 they had a new store built at Tobin’s Wharf. Earlier, James Tobin had become a committee member of the East India Trading Association, formed in the city. The Halifax merchants had sought and obtained a legal opinion on what appeared to be a change in legislation which opened trade to India after long years of a monopoly by the East India Company. Besides Tobin, the Halifax committee consisted of James Bain, Martin Gay Black, the brothers Allison, Stephen N. Binney, J. Clark, Stephen W. Desblois and J. H. Tidmarsh. The hope was to secure more trading advantages for Halifax. The first vessel sailed in June to high expectations. Though this did not prove to be as successful as initially hoped, it did prompt the East India Company to establish direct sailings from India to Halifax. The perceived threat of competition from Halifax could not be ignored.

That the Tobins were men of ability, prudence and determination cannot be denied. Although not all of their investments succeeded, the Tobin brothers diversified their investments – especially in land, government bonds, and new business ventures – and in doing so, they flourished where other mercantile houses failed.