Almost always referred to as Mrs. J.F. Kenny, the wife of Jeremiah Francis Kenny (sixth child of Edward and Ann Kenny), Helen Kenny was a leading light in social, artistic and charitable circles in Halifax in the late 1800s. The tributes that attended her untimely death in 1897, when Helen was only 42 years old, attest to the high esteem and affection that so many Haligonians held for this talented and gracious woman from Montreal. Mary Helen Furniss was educated at the Sacred Heart in Montreal, so her strong Catholic background fit well with that of the Kenny family into which she married in 1874. 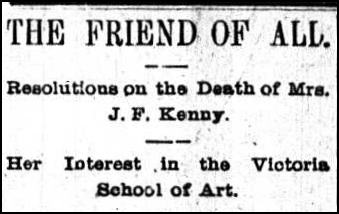 Among her many activities in the community, perhaps her most significant achievement remains the primary role that she played in the founding and grounding of the Victoria School of Art and Design (VSAD), now known as the Nova Scotia School of Art and Design (NSCAD). Anna Leonowens of Anna and the King of Siam fame has been more generally remembered as a founder of the art school; however, Mrs. J.F. Kenny deserves equal credit. According to Donald Arthur Soucy, whose dissertation gives the most detailed information about Kenny’s role in the development of the art school, the two women complemented one another, and contributed different abilities to their mutual project, the founding of an art school.

The newspapers of the day often reported on Kenny’s social activities, describing her striking appearance, beautiful attire and gracious entertaining. As well, the press noted her charitable activities and very able skill in fundraising.

Her involvement with the NSCAD was not only as an organizer and fundraiser; Kenny had artistic talent as well. In the first year that the school offered a daytime art class for amateurs, Kenny enrolled along with five other women.

A founding member of numerous women’s initiatives in Halifax, Kenny’s list of organizational affiliations and charitable activities included the Local Council of Women, the Society for the Prevention of Cruelty, the Woman’s Work Exchange, the Children of Mary of the Sacred Heart and the Ladies of the Catholic Benevolent Society. She often served in key leadership roles. Like others in the Kenny family, she loved theatricals. While her sisters-in-law, nieces and other members of the extended family took on dramatic roles, Kenny was more inclined to organize and stage the events, for both fundraising and entertainment purposes.

Available on microfilm, Kenny’s scrapbook, which is in the Public Archives of Nova Scotia collection, includes miscellaneous newspaper clippings, theatrical programs, poems, letters and the odd photograph. Though somewhat worn and tattered, it is a treasure trove of information about the social life in Halifax during the waning years of the 19th century.

That Helen Kenny was beloved and respected by many is undoubted. All the newspapers of the day mourned the loss of this talented and vibrant contributor to the arts, social and charitable life of Halifax. According to reports, a large number “of all classes of life” followed the hearse from St. Mary’s Cathedral to the Holy Cross Cemetery where she was buried. The many floral tributes were then donated to the hospital “to brighten the wards”. Although still a relatively young woman when she died, Kenny made a difference and her greatest legacy is the continued vibrancy of NSCAD.