One of the ways that Sir Edward Kenny contributed to Halifax society was through his involvement in St. Mary’s Roman Catholic Parish. He and his brother served that community in various capacities, and were active in parish life. The Church was sacred to the Kenny family and its teachings were central to their belief system. Through their involvement in St. Mary’s parish, Sir Edward and Ann Kenny bred into their children a love of Catholicism and its traditions. Through faith and acts, the Kennys acted on their deep convictions by generously supporting numerous charities throughout the city of Halifax. One contemporary recalled that Sir Edward “never refused alms to anyone who sought his aid.” His hospitality was said to be “proverbial”. It is natural that the deep religious convictions of Sir Edward and Ann Kenny would pass to their children. Thoughts of the priesthood were present in the minds of the Kenny boys from a young age and three ended up as priests in the Society of Jesus.

In 1851, the fifth-born child, George Kenny, went to New York City and enrolled at Fordham University, which had been recently opened by the Jesuits. Training under New York’s finest Catholic intellectuals, George returned to Halifax with the intention of becoming a lawyer. By 1871, having worked in law for some years, he discerned a call to join the Society of Jesus and entered Woodstock Seminary in Maryland. George was blessed with a keen mind and after ordination in 1874, he began a long and illustrious career in education. He taught at a number of Jesuit institutions, including Fordham and the Collège Sainte-Marie (later merged into the University of Quebec at Montreal). For a short time he even served as Rector of St. Dunstan’s College in Charlottetown, PEI. As Superior General of the Jesuits in Canada, Kenny was renowned as “one of the most eloquent priests in the Dominion” and one former student at Fordham recalled that the class “worshipped” their teacher. Fr George Kenny died in Guelph, Ontario on September 26, 1912.

While Fr George laboured in North America, two Kenny boys were destined to serve the Society of Jesus with distinction in England. In 1846, Sir Edward sent his son Thomas E. to Stonyhurst College in Lancashire, England. Operated by the Jesuits since 1593, Stonyhurst was England’s premier Roman Catholic college.

The 1840s and 50s was an exciting period in the history of Roman Catholicism inEngland as converts from the Oxford Movement began to flow into the Church. Thomas E. graduated from the college in 1850 and returned to his father’s business in Halifax. Eight years later, however, his brothers Joseph and William entered Stonyhurst and embarked on long careers as English Jesuits.

Neither brother was an academic standout at Stonyhurst, but they both showed leadership potential. William “Bill” Kenny, served as a “class head” and upon graduation he began the journey toward ordination. He was received into the Order at St. Beuno’s College in North Wales and went on to serve a number of English Churches, including Liverpool College where he was Prefect General. Known as a “strict disciplinarian”, Fr William was devoted and with “beads in hand” he was always on hand to say Mass in the early mornings. William faced death with a “business-like nature” and died in Edinburgh in 1914.

Unlike his more studious brothers, Joseph Kenny was a great athlete and excelled on the Cricket pitch. A founding member of the Stonyhurst Cricket Club (SCC) in 1860, he was the College’s first batsman to score a century in competitive play. Like Fr William, Joseph was ordained at St. Beuno’s College before returning to Stonyhurst to take charge of the “Philosophers” for a short period. 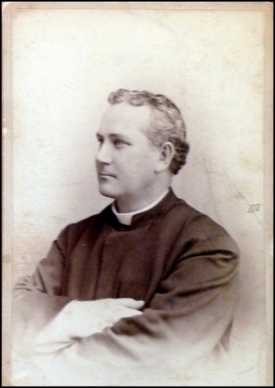 As an outstanding athlete, it is somewhat ironic that Joseph was not blessed with good health. He was forced to return to England from his missionary post in British Guiana in 1883 due to illness and these ailments plagued him for his entire career. A “hard-working” priest full of “zeal for souls” Joseph took posts as Rector of the Church of St. Mary in Merseyside, and St. Ignatius College in Malta where he also acted as chaplain to the British troops stationed in the naval base. Fr Joseph’s final years were spent mainly in hospital and he died at Beaumont College in Berkshire in 1933.

Like their brothers, the Kenny girls also desired to serve their Church. The girls were educated at the local Convent School in Halifax under the tutelage of the Sisters of the Society of the Sacred Heart who operated both a free school and a ladies’ academy.

The second youngest daughter of Sir Edward and Ann Kenny, Ellen “Ellie” Maria, entered the Society of the Sacred Heart in 1864 (at the urging of the Mother Superior of her Halifax school) and made her vows at Manhattanville, New York in 1867.

She returned to Halifax to teach at the Convent School of the Sacred Heart and served her native community until 1889 when she left for St. Louis Missouri. Her remarkable career of service saw her labour in London, Ontario, Rhode Island, Montreal and New York. Very much her father’s daughter, she was blessed with a sharp intellect, and capable of both warmth and cold pragmatism. Her “manner of helping” recalled one colleague, “made a big impression on me”. She was a natural teacher and even on her deathbed she weakly commented to an attending sister, “Your pronunciation is very indistinct my Sister. Speak Articulately”. She died in Albany, New York, on 12 November 1925 at the age of eight-two.

The growth and development of Catholic parishes in the greater Halifax area owe a great deal to Edward Kenny for his generous financial support. As a devoted Catholic couple, Ann and Edward Kenny were well endowed, both financially and spiritually. They were very interested in education and gave their children the resources to follow their own paths. Those children who remained in the lay world actively practiced their faith, but it should not be surprising to find that four children went farther and devoted their lives to Holy Orders and life-long ministry.