Life can turn on a dime. The fate of a young Haligonian working for the government as a customs gauger significantly changed in 1855 when he chose to lock horns with none other than one of Nova Scotia’s most famous and powerful politicians, Joseph Howe. For a brief few years, William Condon’s name was on everyone’s lips and the fight between Howe and Condon was emblazoned across all of the Halifax newspapers, with supporters and detractors lining up on either side.

Why Does Mr. Howe Carry on So?

Political and religious tensions that had been simmering for years came to a head in the unholy war of words exchanged by the opposing parties.

William’s parents, William and Anne (Ryan) Condon arrived in Halifax from Ireland circa 1812 and had their first child, John, in 1813. He was followed in close succession by Mary Anne (born 1814), Margaret (1816), William (1818), David (1820) and Elizabeth (1824). When son William was only ten, his father, a truckman, died. That same year the youngest of the Condon children, Elizabeth also died. 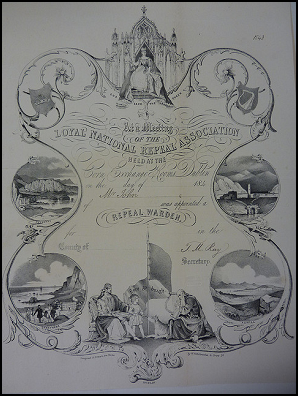 Surprisingly enough, William Senior’s widow Anne remarried in 1829 to a second man named William Condon. Six years younger than his bride, he helped raise his stepchildren until his untimely death in 1839. Born February 18, 1818, “our” William was already 21 when his stepfather died. Along with his brother David, William owned a dry goods store in Halifax. How long they remained in this trade is uncertain, but deed records found in Tracadie place William there by 1844, so he presumably left the business around that time.

In 1839 Condon was elected a member of the Charitable Irish Society, making him one of the youngest members. In 1843, with the establishment of the Loyal National Repeal Association, Halifax Branch, William Condon not only became a member, but one of the Wardens of the organization. As Terry Punch, one of the leading scholars of Irish history in the Maritimes puts it, Britain’s Act of Union in which Catholics were still denied full rights disillusioned many Irish at home and abroad. Led by Daniel O’Connell, an M.P. in Ireland, the Loyal National Repeal Association sprouted chapters in several communities in Atlantic Canada. A large proportion of Irish Catholics from the full socio-economic spectrum joined the organization. William was one of many such Irishmen.

On 30 November 1843, William married Elizabeth O’Bryan from Ship Harbour. How the two met is uncertain, although it may be related to the fact that Elizabeth’s father, Captain Patrick O’Bryan, owned a house in Halifax. The marriage took place at St. Peter’s Church in Dartmouth, with Father Denis Geary presiding. About a year later, Elizabeth and William moved to Tracadie, where they remained until about 1849.

That year, William left Nova Scotia in order to seek his fortune in California. After his return in 1852, he immediately gained employment. By 1854, he was working for the Board of Revenue, as a gauger and proof officer.

On 1 January 1853, Elizabeth gave birth to their first child, a daughter named Mary. Unfortunately, the young Mary died the following year (27 July 1854). Another child, William (as if we need more Williams), was born in 1855. This year would prove to be an eventful one for the Condon family.