Lighthouses became somewhat of a family business for the Condons. Previously partners in a dry goods business, the brothers, David and William, parted ways around 1849 when William left for California. At this time, David was living in Tracadie – deeds showing the sale of 5 acres of William’s land to David suggest that the younger brother remained there until sometime in the 1850s before returning to Halifax. 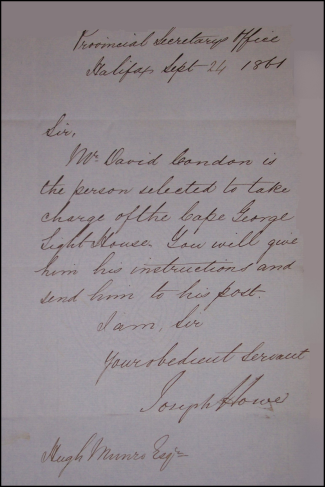 In 1861, David was appointed the first lighthouse keeper at Cape George – by none other than Joseph Howe. It is unclear whether or not Howe was aware of the connection between David and William Condon, although it is unlikely that it would have escaped his notice. Perhaps his appointment was the result of his Antigonish connections. David’s wife Margaret (née Smith) was from that county. Her father, Joseph Smith was well known in the community, and her sister, Sarah, married Hugh McDonald, a local lawyer, judge, and eventual Member of Parliament. Whatever the reason for the appointment, David remained the lighthouse keeper at Cape George for over twenty years.

In 1881, David wrote a letter to Sir John Thompson, who was then the MP for Antigonish, as well as Attorney General. In his letter he requested an extension of years served for his superannuation payments. This request was, in part, justified by the rigors of the work:

Sometimes in heavy gales the machinery will not work owing to the shaking of the building, and I am then obliged to sit on the metal floor of the Lantern and turn the machinery by hand. Owing to this, I have contracted Chronic Rheumatism and Bronchitis, and my health is otherwise very much impaired. My wife’s health is also very much broken down, and she thinks she can no longer remain to battle with the storms of this wild place – six years ago she received so many frights that she became insane, and remained so for eight months and altho God in His Mercy restored her reason she is still very excitable and terrified in heavy storms, and I am often afraid of a return of the same affliction. I would have left here years ago if I could have seen my way clear to support my family anywhere else, but as my salary is so small it was impossible to save anything out of it, and I had not the courage to face the world without a dollar.

In the same letter, David also requested that when he retired, his son be made the lighthouse keeper. David’s requests were granted.

He received his superannuation, which continued until 1888. At some point, he had been appointed a Notary Public and Justice of the Peace, and it was his intent to open an office in Antigonish. Whether he did or not remains unknown. Sixty-two years old at the time of his retirement, there are no death records for David or his wife Margaret, so it is unknown when or where they died.

In 1882, David’s son, William (a surfeit of Williams), became the second lighthouse keeper at Cape George. A week after receiving this appointment, William married Louisa Livingstone, the daughter of a local farmer. Together the couple had three daughters, although only one survived. Born on December 12th, 1887, Josephine Condon lived well into adulthood.

Son William’s term as lighthouse keeper did not last long at Cape George, however, for in 1889, he wrote a letter of resignation to Sir John Thompson. In it, he cites his wife’s death as his reason for leaving the post. Unfortunately, a response was not immediate so in July William wrote another letter, this time asking to rescind his resignation. By this time it was too late, as Hugh McDonald of Antigonish had already been given the post earlier in the month.

Without employment, William left his young daughter Josephine in the care of his wife’s second cousins and travelled North to the Klondike, hoping to try his luck as a prospector. William kept in touch with his daughter, sending her gifts from time to time. However, at some point, all communication ceased. Although no records can be found with regard to his death, it appears that William Condon died anonymously, far from home.